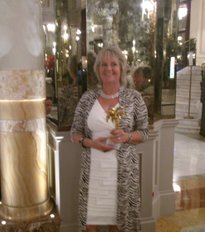 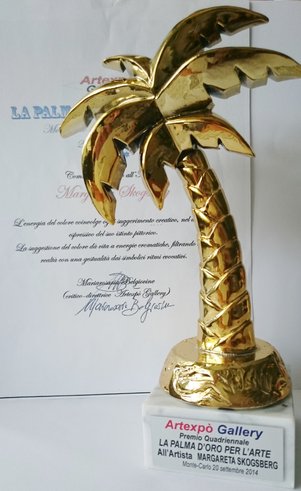 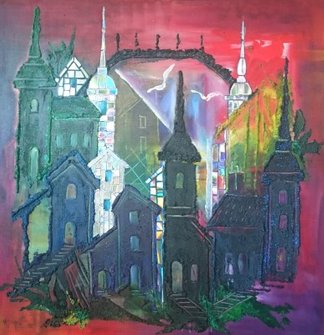 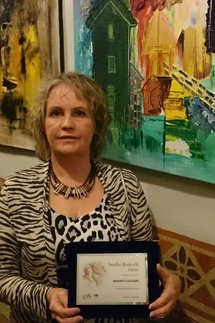 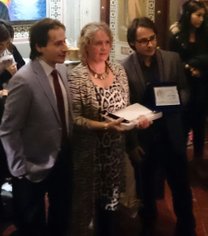 of building the pictorial space. Her forms of human features, often just profiles are elegant and

almost impalpable. They are forms with an elegant constuctive balance, are made through a harmonius

and well balanced color theory relationship. There is, in the art of Margareta, a realease of emotional

energy and feelinghs, which presides over the creation and the structure of the paintings. The light,

a resault of wise choises of color, is the dominant trait of the artworks, treated as a narrative element,

but also as a tool to reveal the mystique behind the artwork.  The light is often treated and reflected in

crystals, clear sign of experience of glass at the artist, which are a decorative piece but also a key sign

in the dramatic perspective of the picture. The Nordic legacy of the play of light and shadow is also an

instrument of soul searching, faceted the human soul as a diamond in relationship with nature, a nature

understood as sentient entities and completionof of the existential ego.

ethereal blue of the artist, as if to tell us that the soul has no boundaries but materials such as paint

on the canvas, faded in to the eternal and universal.

Reading. Margareta Skogsberg is an artist able todevelop her own signic alphabet. An alphabet

whose linguistic resides in the great gesture of the artist, which presents us its cities of light.